I saw this TEDTalk several months ago, but the message in it has been rattling around in my head since then.

Kathryn Schulz is a “wrong-ologist”, at least that is what I am calling her even if the rest of the world isn’t calling her that.  She gave this TEDTalk a couple of years ago about how we humans hate finding out we are wrong and the lengths we go to in order to avoid it.

Schulz says that one of the big reasons we humans like being right so much and hate being wrong about any given topic/issue/idea is that we are socialized to strive for “rightness.”  Getting the answer right on tests in school, answering questions correctly in class, etc., were rewarded with praise and were treated as indicators of whether one was a “good” kid or a “goof off” kid as we are growing up.  We learn early that being right is good.

And thus, we constantly (albeit sometimes subconsciously) strive to be right, assuring ourselves that our opinions, our ways of doing things, our methods are the “right” way.  Because we are good people, so we must be right.

The internet has certainly increased my knowledge and awareness of how many people do not share my viewpoint on a lot of topics.  I can’t count how many times I have read a news piece on-line which I thought was so straight forward, i.e. man convicted of killing wife after jury heard details of how he was found with bloody knife in hand and confessed, to only read dozens and dozens of comments by other readers that lambasted the jury, criticized the judicial system, vilified the police.  “WTF?”, I think.  “Aren’t they reading what I’m reading?  Can’t they see what I see?”

How do I reconcile someone not thinking/acting like I do if I am right most of the time?

She says we compensate by using a set of “Unfortunate Assumptions”.  The first assumption is that if someone doesn’t think like you about a particular topic, then they just must not have all the information that you have.

Yep, that’s me.  Been there, assumed that. 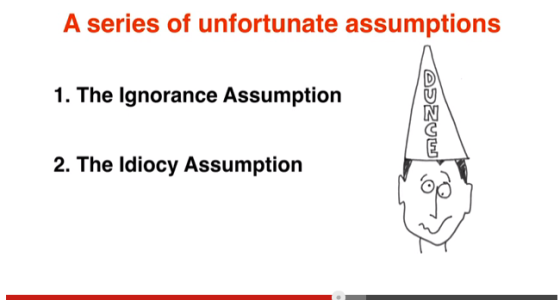 If you find out that the person is actually quite smart (that is, NOT an idiot) and that they still don’t think like you, well, there’s only one conclusion to draw. 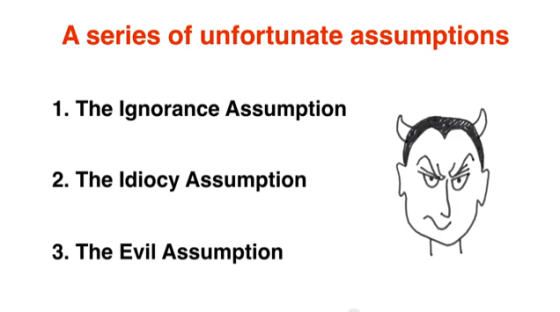 YES, they are just evil and trying to make me look bad and disagreeing with me for no other reason than to be mean.  They should be destroyed!  Mwah-ha-ha!

When I first watched Schulz’s TEDTalk, I laughed out loud at the part about the “Unfortunate Assumptions” because it described me perfectly.  I could have been the person that she studied to develop it.

But as the months have gone by, I’ve tried to have a more serious response to this.  And that response is to be more careful and thoughtful to someone who doesn’t think/act like me or disagrees with me.  My first reaction cannot be a trip down these three assumptions.  More than likely they are making the same three assumption about me.  (Wonder how fast they are getting to “Evil”?  Oh, wow!  I wonder if they are even getting to “Evil” or have just abandoned it as a case of “Idiocy”?  Crap, that would sting.)

I’ve been working on this for several months — and IT IS HARD!  It is hard to stop myself from automatically taking a defensive position on my opinion.  It is hard to question the strength of my belief in my opinion.  It can be hard to admit that I am wrong.  And sometimes (I confess) I still don’t admit it.  (Because my wrongness is occasionally outweighed by my stubbornness.)

But I do enjoy calling fewer people “Idiots” these days.  If I ever called you an Idiot, I apologize.  I’m sure you were calling me one, as well.  No hard feelings.  We cool.

By the way, there is a whole lot more in Kathryn Schulz TEDTalk than these three assumptions, so really, if you get a chance, watch her.

2 thoughts on “I see evil people. Do they see me?”

The Prospect of Bees
Hiking Photography

Beautiful photos of hiking and other outdoor adventures.

Buzzing Around in My Head