I have been uncommonly involved in soul-sucking meetings over the past several weeks.  In fact, the part of my soul that cares about the fate of the rainforest is gone.  I got nothing in me for the rainforests.  If things don’t change soon, I’m not going to give a rip for the starving children in China.  This can’t go on.

I drew a new picture to express how I have felt in some recent meetings. 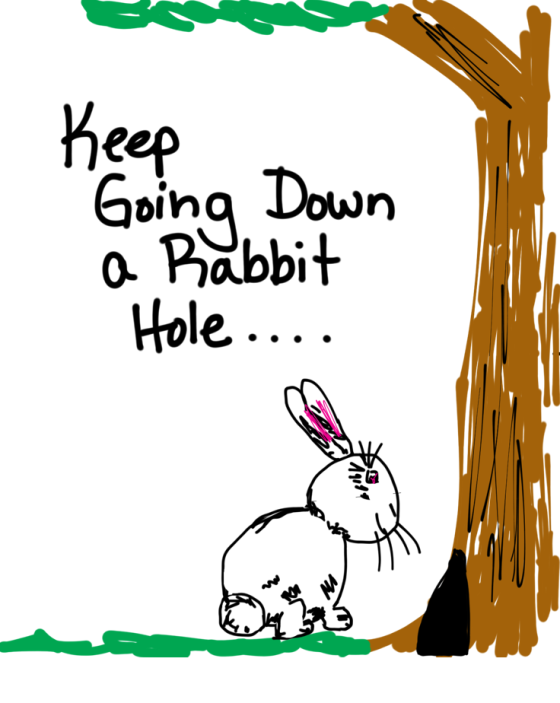 Are We Going to Talk About this Topic Again?

I feel like Alice in Wonderland some days, but Wonderland is filled with reports and white boards and lots of coffee.  And I think that I would feel somewhat better about these meetings if we were actually discussing world-changing topics, like the rainforest or starving children in China.  But we’re not.

It’s been one of those weeks where you ask yourself “What am I doing with my life?”  I mean, it’s not like I’m curing cancer.  (Short digression — why is “curing cancer” always used as the example for “doing something with my life”?  Do you think that’s what scares people the most?  That’s not my biggest fear.  Ok, back to program.)  I’m performing honest work, but how is it changing lives?

I went through a period of asking myself “what am I doing?”, “how do I matter?”, “what is my purpose?” during my mid-30s and I’ve watched many of my younger friends go through the same introspection at about the same age or a little later in their lives.  I guess the mid-life crisis cliché is a cliché for a reason.  I believe that most people need to feel like they matter, like they have done some good in the world, like they are doing more than just taking up space.

And with the exception of times like this past week, I have made peace with my purpose.  I am not going to cure cancer.  Or become the next Steve Jobs.  Or become a missionary to some isolated place in the South American jungle.  But I can impact my little, itty-bitty section of time and space by being kind, telling the truth, offering my help, giving a smile, laughing freely, thinking of others…..  I know that these small things, when offered to me, have often changed the course of my day, the outcome of the week, the tone of a relationship.  I can do these.

5 thoughts on “Being here isn’t always fun, but it can be productive”