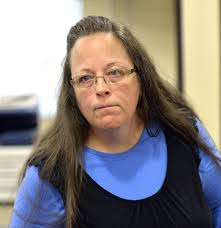 Listening to the news and scrolling through Facebook, I hear this name and see this face everywhere.  Kim Davis…  Lots being said about Kim Davis.

I feel wrong for being glad and for feeling a sense of vindication because she was jailed today for contempt of court.  Why wrong?  Taking pleasure in someone else’s misfortune is something that I strive to avoid.

But I have to own those emotions — there should be consequences for her actions, and I am pleased that she is facing some.  I have been disturbed by her refusal to issue marriage licenses to gay people, claiming that it goes against her Christian religion.

My reasons for feeling this way are manifold:

I have seen comments and articles that argue that since this is her job, she should just do her job.  I agree, up to a point.  Everyone should have the ability to question their own actions on a job, and to be able to refuse to do something if it is unethical or illegal.  Following orders blindly is questionable behavior, as well, but in this case, issuing marriage licenses IS legal.  She, however, is choosing to do what is illegal and unethical — discriminating.

But the use of religion as her validation for her actions irritates and scares me.  I am a Christian, but I don’t want this to be the example of my faith.  And it has nothing to do with my feelings about homosexuality.  It has everything to do with the judging and unloving attitude that she is exhibiting.

I believe that my God charged me with loving my neighbor.  He didn’t call me to His side by asking that I determine what is right or wrong.  He doesn’t ask me to judge those around me and determine their worthiness.  (And for not doing so, I am forever grateful.  What a huge burden and responsibility to judge others — I would not want to determine someone’s character based on the imperfect knowledge that I have about that person.  I have, at best, a 50/50 chance of getting it right, but in reality, very little hope of knowing that person’s heart and head.  Judging is best left to an all-knowing God.)

He asks me to LOVE.  Love my neighbor.  Love my enemy.  Between those two ends of the spectrum, I think the message is clear — love all.

I do not feel like Kim Davis is exhibiting a loving heart.  And there are PLENTY of other examples like this one that are of someone who calls themselves a Christian acting without a loving heart.  She is not alone in her behavior.

These are the reasons why I have a problem with Kim Davis’s actions (and yes, I know I am judging…ironic, huh?).  She is not a reflection of me just because we share the same God and Jesus.  This is why I was secretly excited to see her experience some punishment.  (Again, I wish that I didn’t feel that way — you know, All Judgy Judgerson.)