Halloween is definitely in the air.  The little pumpkin patch near our house has been up and running since the end of September.  All the retail stores have decorated for the season and people are bringing pictures to work of their kids modeling their Halloween costumes.

I was a big Halloween fan as a kid, but we were a “make-a-costume-from-items-you-already-own” household.  One year, Mama did ask a woman to sew for me a pilgrim costume, so I had a long, black dress, a white apron, a white hat and a white pilgrim collar.  That costume was also used to create a witch (black dress, add a witch hat) and a maid (black dress, white apron), so we definitely got our use out of it (I remember I wore it until the seams were pulling and the hem was several inches off the floor).  But we didn’t have store-bought costumes.  I was a cow girl a lot because I always owned boots and jeans.

I don’t know if most Americans realize that Halloween isn’t a global holiday.  Or at least it wasn’t in 1990 when I was a college student spending the semester in Dijon, France.  I was there with 19 other students from Wake Forest University, in an immersion program to learn the language, history, culture, etc.  And Halloween came around.  Each of us students lived with a different French family, but we had a professor from WFU that lived in a house in town and he threw a Halloween party for us.

I decided to go as a Michelin Guide Vert, a Michelin Green Guide, the travel guide that we used at that time.  Ever seen one from that era?

I wore my green outfit and accessorized accordingly.  Here I am with my friend, Laura.  She dressed as the Michelin Man. 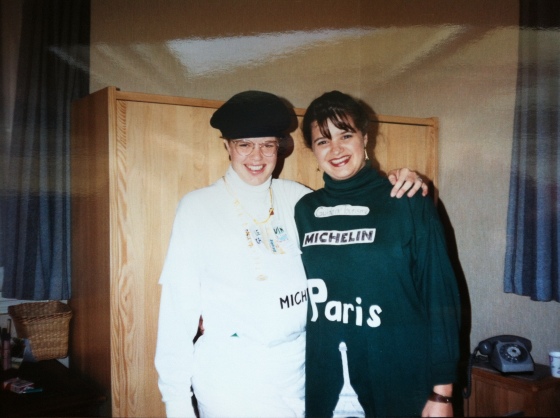 The most interesting thing about our Halloween was that the French do not (or didn’t in 1990–I don’t know about now) celebrate Halloween.  No one that I talked to seemed to even know what it was.  As we Americans were riding the bus to our professor’s house, all decked out in our costumes, we got a lot of looks from the normally very blasé French.  And my conversation with my French family went something like this (but in French):

French mother:  Why are you dressing up?

me:  It’s something all American kids do.  You dress up on October 31.

French mother:  And then what?

me:  Well, then you walk up to people’s house and say, (thinking how to say “Trick or Treat” in French and failing), you say “Give me candy.”

French mother:  And people give you candy?

French mother:  Is this something that they just do in your village?

me:  No, everyone in America does it.

It was this discussion that proved to me that traditions don’t have to make sense.  I know that my French was inadequate to describe “Trick or Treat”, but come on, when you think about dressing up, walking up to people’s doors and saying, “Give me some candy or I will pull a trick on you”, you do have to question the sense of it.  Wouldn’t you ask, “Is this just your (quirky) village?”  I love traditions.  And quirkiness.